About 80% of the land in Summit County is federal public lands. That really limits the buildable areas but gives many more recreational opportunities. The county is in the high rockies located just west of the Continental Divide. The lowest point of elevation is at Green Mountain Reservoir in the northern end of the county at 7,947 feet.  The highest point is on top of the Continental Divide where Gray’s Peak tops out at 14,270 feet. 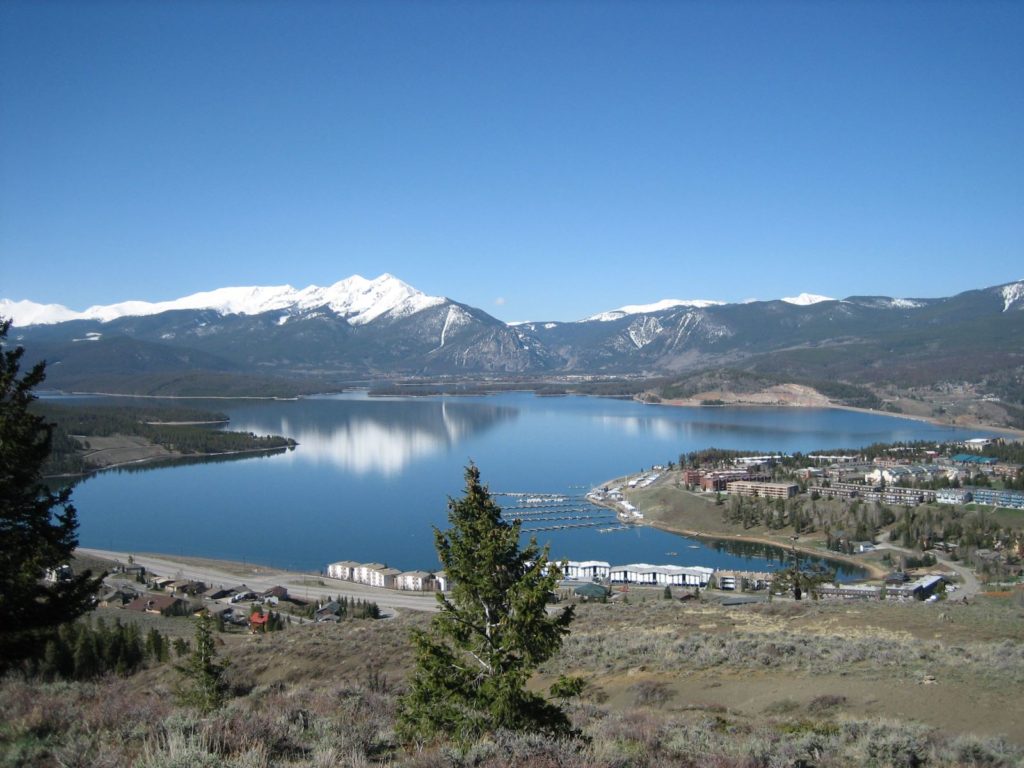 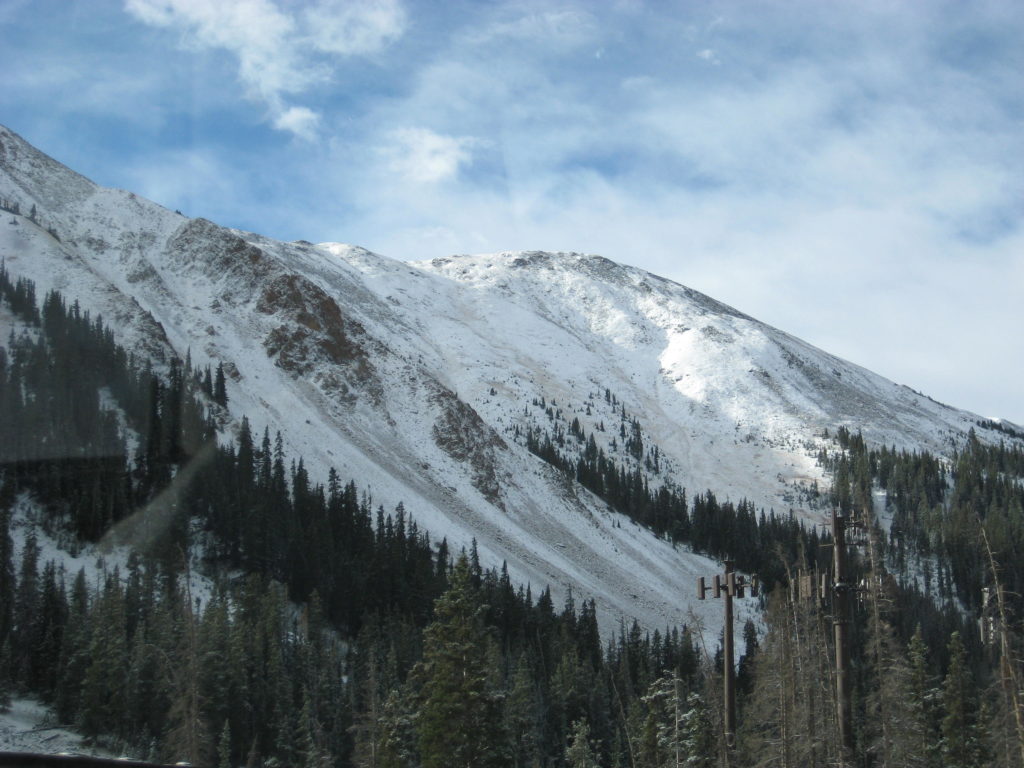 Lake Dillon is a reservoir holding Denver’s drinking water. Frisco and Dillon have marinas and are lakeside. Silverthorne is just downstream from the lake. Keystone, Breckenridge and Copper Mountain are just up the road.  The reservoir was built in the 1960s. Before they could build it, the town of Dillon had to move out of the valley. Some buildings, like the Old Dillon Inn (ODI) and The Mint were moved to higher ground. You can still grill a steak at The Mint today. However, most of the town remained and, from what I am told, still sits at the bottom of the reservoir.  The Upper Blue River from Breckenridge, the Snake River from Keystone and Ten Mile Creek from Frisco all flow into Lake Dillon.  The Lower Blue River that runs through Silverthorne flows out of the lake.

The Mountains of Summit County

Gray’s Peak is a 14er. Meaning the peak of the mountain is over 14,000 feet high.  There are three 14ers in Summit County. Quandary Mountain is the only 14er completely in Summit County.  It’s elevation is 14,265 feet. The third 14er is Torrey’s Peak. It is connected to Gray’s Peak and also sits on the Continental Divide.  The Continental Divide is the county line so half of Gray’s and Torrey’s are actually in the neighboring, Clear Creek, county.

Even though there are only three 14ers in the county, there are still a lot of high mountain peaks you can summit. The Gore Range is a gorgeous mountain range and includes Buffalo Mountain.  The Ten Mile Range is the mountain range that run from Peak One above the town of Frisco to Peaks 6, 7, 8, 9 and 10 that make up the Breckenridge Ski Area.

The Eisenhower Tunnel made access to Summit County and the rest of the western slope much easier.  It is the highest vehicular tunnel in the world. It took several years to complete construction of the 1.693 mile long tunnel. Construction for the Eisenhower bore, which is currently the westbound lanes, took five years. It was completed in 1973. The Johnson bore was complete in 1979.

Read more about the Eisenhower Tunnel and it's 40th Anniversary.

Summit County’s high mountain peaks get a lot of snow. Most resorts tout 300-400″ of snowfall per season.  That’s more than 25 feet. It can snow any time of year. Most often our snowfall starts in October and continues through April. Temperatures can fall below zero but when they do, it is generally a cold snap that is short lived. Most often we have temperatures in the 20s and 30s. January is the coldest month. Humidity is very low and we have a lot of sunny days in the winter. That makes it feel warmer than the thermometer says.

Summertime temperatures are generally in the 70s. On occasion it can get into the 80s. The low humidity keeps it comfortable. Our summer rain is usually moderate showers. We rarely see big downpours. We can get a rainy day here and there but most often we see nice mornings that give way to afternoon showers. They clear out and we have cool evenings. The temperatures drop overnight making for great sleeping weather with the window open a bit. Air conditioning is non-existent here, except in commercial establishments.

Discover why we love Summit County

Sign up and receive Summit County listings as they come on the market.

Of the towns in Summit County, Breckenridge properties are, on average, more expensive than other areas. You can find more of the affordable properties within Dillon's boundaries. As in most areas, the further away you are from the main towns, the more affordable the properties will get.  Most homes have .25 acre lots but can have up to an acre or more in some areas. Large parcels are rare until you get further out of town.

It's possible to get between towns within about 15 or 20 minutes so no matter which town you are in, nothing is that far away. Breckenridge has both a ski area and town making it very desirable. Copper Mountain and Keystone are mainly ski areas without much more town than the ski resort base area. Frisco, Dillon and Silverthorne are all towns however Silverthorne doesn't have a downtown area. They are in the process of creating one just north of I-70.  Dillon's town core is on Lake Dillon and enjoys not only a marina but a lakeside amphitheater as well. The town of Dillon is also working to upgrade their town core. Frisco has a charming Main Street that, while not as big as Breckenridge, it has shops and restaurants at street level and condos above. Frisco's Main Street is the home of Mountain Living Real Estate too.

If you decide to short term rent your Summit County property regulations went into effect in 2019.  These regulations include permitting, a safety checklist, and signage. Get all the details on the county website. County regulations only apply to properties outside of town limits. Use the following links for property within the town boundaries. Breckenridge. Dillon. Frisco. Silverthorne.

Most Viewed in Summit County

Jason used amazing strategy for pricing, selling and acquisition of our next property. In this market this strategy is critical for success – especially with the buying process. Summit County real estate is a challenging market. We have bought and sold two properties and just bought our third. Jason and Meredith have been there for END_OF_DOCUMENT_TOKEN_TO_BE_REPLACED

You guys did an exceptional job for us and went the “second mile” in many ways. We were most impressed with Pro-active and involved interaction with us and everyone in the process. Your team was exceptional. Recommended many things for us to do, and then helped us do them. Followed up,, checked in, and helped END_OF_DOCUMENT_TOKEN_TO_BE_REPLACED

Great service- more forward leaning than previous realtors Most impressed with follow up, knowledge of local market, going the extra mile on document review and getting HOA questions answered. Good advice on price point, patience, and negotiations. Understandably you aren’t always available to look at properties, but in the crazy COIVD market there was one END_OF_DOCUMENT_TOKEN_TO_BE_REPLACED