Living in the mountains surrounded by National Forest lands is an amazing place to be but, like anywhere, it is not without it’s risks.  We don’t really have floods, hail or tornadoes around here.  Our big concern is wildfire. Unfortunately, on June 12th a wildfire started on Buffalo Mountain just above the Wildernest neighborhood. 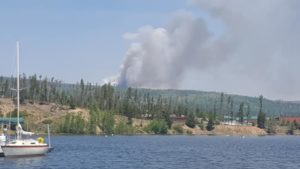 That Tuesday morning was a beautiful morning but at 10:46 someone called in a fire.  From Lake Dillon we could see smoke on the hill and estimated it was around Wildernest.  The smoke was continuing and the plume was getting bigger so I called my mom, Joanne, who lives in Mesa Cortina, the adjoining neighborhood to Wildernest, to see if she had heard anything.  At that time she hadn’t but it wasn’t long before Summit County made the notifications.  Reverse 911 calls went out and texts or emails were sent to those on the Summit County Alert System.  There was a mandatory evacuation in place for the upper portions of both the Wildernest and Mesa Cortina neighborhoods, the lower portions were on pre-evacuation.  The smoke was billowing and there was a lot of fear.  It wasn’t until later that we found out just how close the 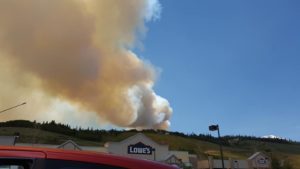 fire was to homes.

Air support was called in and multiple helicopters and slurry bombers were flying overhead attacking the fire very aggressively.  50 firefighters were fighting the fire on the ground and over 100 more were on the way.  Road blocks were in place keeping the residents from going into the evacuation zones, and even the pre-evacuation zones.  The response was nothing short of amazing. Everyone was holding their breath not knowing exactly where the fire was burning and if homes were involved.

The aggressive attack on the fire paid off and by that evening the fire laid down and the smoke going into the sky was minimal.  The personnel involved in the fire fight were reluctant to give any containment numbers and kept the evacuation orders in place but I know we felt a lot better about the situation. 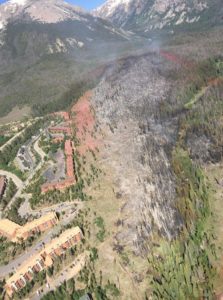 Over the next few days additional information came out about the fire fight.  That information showed us how close the fire came to burning so many homes and how the preventative measures taken by the forest service in conjunction with the county made all the difference in the outcome of this wildfire.

Defensible space is a common term you hear in fire prevention information.  It creates a fire break between the forest and the property and gives the firefighters a fighting chance to save property from a wildfire.  A few years ago, after the pine beetle came through and killed so many lodge pole pine trees in the forests, it was determined that the neighborhoods that backed to national forest lands needed to have defensible space.  A wide fire break was cut.  All the dead and living trees came down.  Most homeowners didn’t like it.  Having the national forest right there was incredible and to see the vegetation we love so much removed was really hard.  Regardless of the protests, defensible space was created around both the Mesa Cortina and Wildernest neighborhoods.  That defensible space helped the firefighters keep this wildfire from going into the neighborhoods.

If you own a property in any area at risk to wildfires, defensible spaces is so important.  Take on the responsibility to ensure you have defensible space around your property.  Even in a condo complex, you can bring it up with the HOA or talk to the county or forest service.  For information on what you need to do to create defensible space around your home, visit firewise.org.  Eliminate ladder fuels, prune bushes and trees, and use fire resistant materials on your home. This work is worth the time and effort if a wildfire ever comes knocking at your door.

While none of us ever want to experience a wildfire, it’s good to be prepared. Another way to prepare is to have an evacuation plan.

Thank you to all the people involved in the firefighting efforts on the Buffalo Mountain Fire!