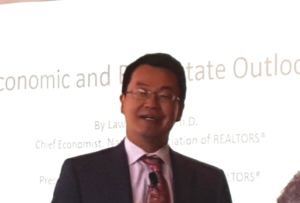 Lawrence Yun, Chief Economist and Senior Vice President of Research at the National Association of Realtors (NAR), stopped by Silverthorne recently to give us an economic update.  This was my first time hearing him speak and I was quite impressed.  In about an hour he gave us a good understanding of the current economic conditions relating to housing.  He didn’t just spout off statistics, although he did produce a lot of charts, but presented the information in a way that connected the dots, tying it all together in an easily understandable presentation.  Because he works for the NAR I thought his presentation might be jaded to show housing in the best light possible.  I saw it as an honest portrayal of where we are economically.

Here are some of the things that stood out to me during his presentation:

Nationally, GDP is around 2% instead of our average rate of 3%.  Business are keeping profits instead of reinvesting and business borrowing is lower.  The economy is still growing but at a slow pace. 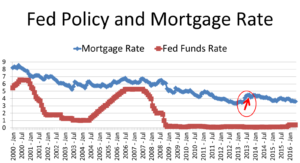 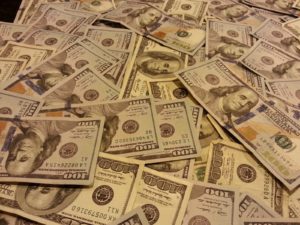 Our national debt and printing of money typically sparks inflation.  This time around other countries are suffering more with huge debt, negative interest rates and governments pushing their economies along.  Even though we are not doing great, we are better than a lot of others so our dollar is staying strong which is holding back even more inflation.

Some areas of the country are seeing record increases in housing prices.  San Francisco’s huge increases are helping places like Denver and Seattle as those that can no longer afford San Francisco seek out employment and housing in lower priced areas.  As a result, slowing in the San Francisco market will also impact other housing markets across the country.  Because Denver is a huge feeder market for our Summit County second home market, slowing in Denver’s market will eventually slow the Summit County market.  It’s a trickle down effect.

Fewer young people are entering the housing market.  Many are still living at home with mom & dad trying to pay off college debt and avoiding high rents.  They still dream of home ownership but it is further down the road for young people than it has been in the past. 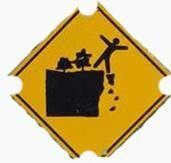 Overall the economy is doing ok.  At some point all of these things will catch up with us.  The only question is when.  It’s extremely difficult for anyone to say how long we can balance on the edge of this cliff before tumbling off.  It could be one more year or ten.  All you can do is make sure you are comfortable with your current situation and where you see your future.  Be confident that if the economy goes over the edge, you will still have some stability in place and can manage to climb down slowly if needed.

Jason used amazing strategy for pricing, selling and acquisition of our next property. In this market this strategy is critical for success – especially with the buying process. Summit County real estate is a challenging market. We have bought and sold two properties and just bought our third. Jason and Meredith have been there for END_OF_DOCUMENT_TOKEN_TO_BE_REPLACED

You guys did an exceptional job for us and went the “second mile” in many ways. We were most impressed with Pro-active and involved interaction with us and everyone in the process. Your team was exceptional. Recommended many things for us to do, and then helped us do them. Followed up,, checked in, and helped END_OF_DOCUMENT_TOKEN_TO_BE_REPLACED

Great service- more forward leaning than previous realtors Most impressed with follow up, knowledge of local market, going the extra mile on document review and getting HOA questions answered. Good advice on price point, patience, and negotiations. Understandably you aren’t always available to look at properties, but in the crazy COIVD market there was one END_OF_DOCUMENT_TOKEN_TO_BE_REPLACED