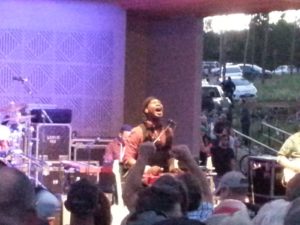 The amphitheater was packed as the opening band took the stage.  John Trucelli said the crowd was 10 times bigger than what they’re used to playing for. They are a local band and play venues all over Summit County.  They played a good set, introducing their new album to the crowd.

Then it was time for the main event.  Robert Randolph and the Family Band took the stage.  The crowd roared and the floor in front of the stage was full in no time as everyone got up to dance.  Robert Randolph is ranked as one of the 100 best guitarists by Rolling Stone.  His music is very high energy, funky & soulful.  Many in the crowd were wearing ear plugs because it was so loud.  I think that must have chased off a few of the younger and older listeners as the evening progressed.  Those that remained had a fantastic time jamming to some great music as the band put on an awesome performance.  Robert engaged with the crowd, inviting the ladies in the crowd on stage to dance, bringing up a fan to play guitar with him and another to sing. 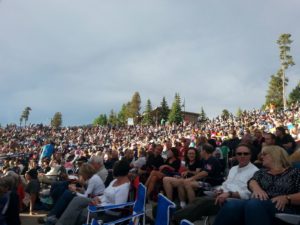 Robert Randolph & the Family Band was a fantastic way to kick off the summer season at the Dillon Amphitheater.  All shows are free at the amphitheater.  Concerts will be happening every Friday and Saturday nights all summer long with performances by a variety of artists.  It’s a great way to spend an evening under the stars in Dillon, Colorado.

Jason used amazing strategy for pricing, selling and acquisition of our next property. In this market this strategy is critical for success – especially with the buying process. Summit County real estate is a challenging market. We have bought and sold two properties and just bought our third. Jason and Meredith have been there for END_OF_DOCUMENT_TOKEN_TO_BE_REPLACED

You guys did an exceptional job for us and went the “second mile” in many ways. We were most impressed with Pro-active and involved interaction with us and everyone in the process. Your team was exceptional. Recommended many things for us to do, and then helped us do them. Followed up,, checked in, and helped END_OF_DOCUMENT_TOKEN_TO_BE_REPLACED

Great service- more forward leaning than previous realtors Most impressed with follow up, knowledge of local market, going the extra mile on document review and getting HOA questions answered. Good advice on price point, patience, and negotiations. Understandably you aren’t always available to look at properties, but in the crazy COIVD market there was one END_OF_DOCUMENT_TOKEN_TO_BE_REPLACED