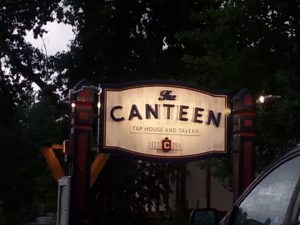 The old Steak & Rib restaurant is now The Canteen Tap House & Tavern.  Recently, a dinner out with our friends meant an opportunity to give the new, Breckenridge restaurant a try.  We suggest you stop in when you get a chance too.

Our dinner consisted of a variety of drinks, appetizers and entrees.  The drink menu was extensive.  The margaritas and dark & stormy were served in tin cups that looked like something you would use to scoop your water out of the well with back in the day.  Both the ahi tuna and BBQ flatbread appetizers were hits at our table and disappeared in no time.  The tuna was served on a bed of guacamole ready to be scooped up with the tortilla chips served with it.  Our entrees were the southwest chicken salad, ribs, a burger topped with chilies and cream cheese and a Reuben.  Jason is a Reuben guy and can be pretty particular about them.  This one was a big hit with him resulting in the best compliment that can be given; that it will be ordered again.  The burger was equally as good resulting in more rave reviews.  The salad was pretty good, I mean it is a salad after all, although it was served in a bowl that was a little small making it hard to eat without it spilling over the sides.  The ribs were reported to have a hint of spice in the sauce and rub.

The service we received in the bar was also good.  We even had a visit by one of the owners, Mike Steger.  He chatted with us for a while even though I’m sure he had to be very busy.  He even went out of his way to provide 4th of July event information to our friends that just moved to Colorado.

If you haven’t had the opportunity to stop in to The Canteen yet, make it a point to do so.  Now that they are also open for lunch, it’s even easier to give it a try.

Jason used amazing strategy for pricing, selling and acquisition of our next property. In this market this strategy is critical for success – especially with the buying process. Summit County real estate is a challenging market. We have bought and sold two properties and just bought our third. Jason and Meredith have been there for END_OF_DOCUMENT_TOKEN_TO_BE_REPLACED

You guys did an exceptional job for us and went the “second mile” in many ways. We were most impressed with Pro-active and involved interaction with us and everyone in the process. Your team was exceptional. Recommended many things for us to do, and then helped us do them. Followed up,, checked in, and helped END_OF_DOCUMENT_TOKEN_TO_BE_REPLACED

Great service- more forward leaning than previous realtors Most impressed with follow up, knowledge of local market, going the extra mile on document review and getting HOA questions answered. Good advice on price point, patience, and negotiations. Understandably you aren’t always available to look at properties, but in the crazy COIVD market there was one END_OF_DOCUMENT_TOKEN_TO_BE_REPLACED