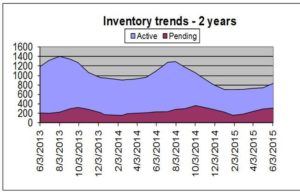 As we head into summer,  it is typical for the number of properties on the market to increase.  The ski areas have closed, seasonal rentals are done so it’s time for those interested in selling to get their properties ready and put them on the market.  This year is no different in that respect.

Since mid-April, when most ski areas closed, we have had 364 properties come on the market.  But with properties going under contract and selling, only 108 properties were added to our inventory.  Last year new listings were close to the same amount, 370 properties.  However, that increase added 192 more listings our total inventory. Even though the number of properties coming on the market was about the same, they weren’t being absorbed as quickly.

This year inventory levels are down 27% from the same time in 2014 and a whopping 56% below 2009 numbers.  It’s the same old story around Summit County; decreasing inventory and increasing sales.  We are just now coming to the point where this combination is having a significant impact on property pricing.  Some areas in the county are poised to surpass the prices we saw during the peak of our market during this year’s selling season.

The graph shows the correlation between properties on the market and those under contract.  The improving market can be seen by the narrowing gap between the pending and active properties.

Jason used amazing strategy for pricing, selling and acquisition of our next property. In this market this strategy is critical for success – especially with the buying process. Summit County real estate is a challenging market. We have bought and sold two properties and just bought our third. Jason and Meredith have been there for END_OF_DOCUMENT_TOKEN_TO_BE_REPLACED

You guys did an exceptional job for us and went the “second mile” in many ways. We were most impressed with Pro-active and involved interaction with us and everyone in the process. Your team was exceptional. Recommended many things for us to do, and then helped us do them. Followed up,, checked in, and helped END_OF_DOCUMENT_TOKEN_TO_BE_REPLACED

Great service- more forward leaning than previous realtors Most impressed with follow up, knowledge of local market, going the extra mile on document review and getting HOA questions answered. Good advice on price point, patience, and negotiations. Understandably you aren’t always available to look at properties, but in the crazy COIVD market there was one END_OF_DOCUMENT_TOKEN_TO_BE_REPLACED